Relations between Police and the Population Relations: The Defender of Rights publishes a survey on identity checks

While the Constitutional Council will decide on the 24th of January on a priority matter of constitutionality on the issue of discriminatory identity checks, the Defender of Rights publishes today the results of a survey carried out in the year 2016 on the relations between the police and the population in the context of identity checks. In 2016, on the same subject, the Defender of Rights also presented his observations before the Supreme Court (Cour de Cassation,)[i].

The Defender of Rights, Jacques Toubon, wanted to benefit from a reliable knowledge about access to rights in situations that fall within his remit (discrimination, children's rights, ethics of the security forces, relations with public services).  In that perspective, a major survey entitled "Access to rights" was carried out. Its first results on relationships between police and population are published today[ii].

Other results on public services, children's rights and discrimination will be made public in the first quarter of 2017.
For the first time, representative data on national scale are available on the experiences of the population with regard to police or gendarmerie [1]checks.

It is important to underline that the survey reveals a generally satisfactory relationship between the population and the police. Indeed, 82% of the respondents say they trust the police.

Identity checks appear to involve a limited minority within the general population. 84% of respondents declare that they have never been stopped in the past five years (90% of women and 77% of men).
Over the past five years, 16% of respondents generally report few behaviors that contradict the code of ethics of the security forces, such as addressing a person using the “tu” form (which is perceived as a sign of familiarity) (16%), brutality (8%), insults (7 %) or, lack of politeness (29%).

The lack of explanation of the reasons for identity checks is however more frequent (59%), even though when security forces take the time to explain the reasons of a check, it then appears more legitimate.
However, while the police / population relations are satisfactory for the majority of respondents, a number of persons characterized by their age and by their supposed affiliation to certain social groups, report more contrasting experiences.

The survey also reveals that the high frequency of identity checks of one category of the population results in feelings of discrimination and distrust of police and judicial institutions for the persons belonging to this category. This mistrust is due in particular to the lack of information provided by law enforcement authorities on the reasons for the identity checks.

This study confirms the position of the Defender of Rights who, since 2012, recommends ensuring the traceability of identity checks[iii] in order to guarantee access to the legal recourses for persons who consider themselves victims of discrimination and breaches in the field of security forces ethics. In that same perspective, the Defender of Rights wishes to be associated with the experimentation, foreseen under the forthcoming Equality and Citizenship Act, of the systematic audio-visual recording of each identity check carried out pursuant to Article 78-2 of the Code of Criminal Procedure. The traceability of controls is an important issue of security policy: in the long run, it would make it possible to evaluate their effectiveness and possibly to readjust their number and the areas and populations targeted, as it has been experimented and implemented in other countries[iv].

The lessons learned from this survey will be incorporated into the training sessions organized by the Defender of Rights, in partnership with the Directorate General of the National Police, for their students to learn the rules of professional ethics (7,300 students were trained since 2015) to reinforce the prevention of the risks of discriminatory practices and stress the importance of communication when carrying out identity checks.
The Defender of Rights insists on the need to conduct a shared reflection on the legal framework for identity checks, their effectiveness and effects in order to put in place mechanisms to better evaluate their relevance as a security tool, both for the benefit of the persons that are checked and the security forces.

[i]In the judgments handed down on 9 November 2016 by the First Civil Division on the responsibility of the State in cases of discriminatory control: 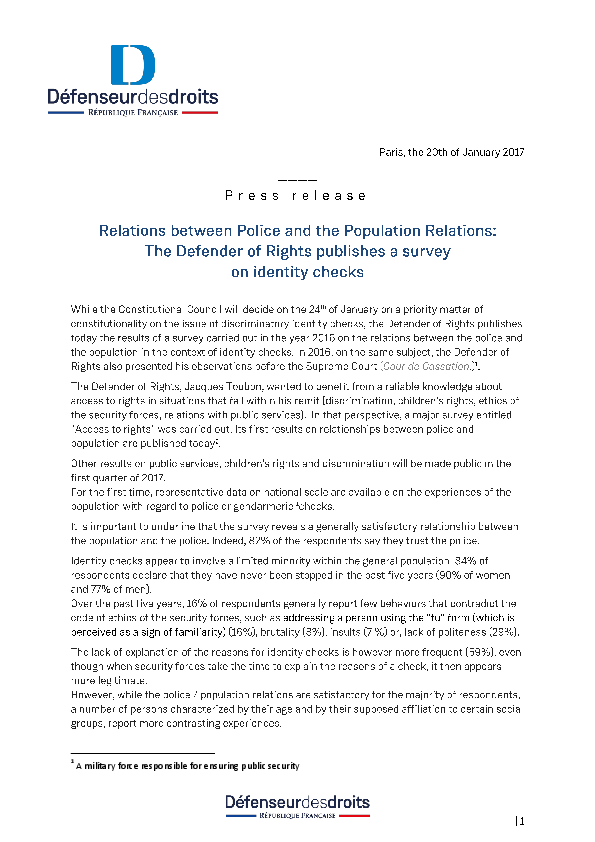 CP - Relations between Police and the Population Relations: The Defender of Rights publishes a survey on identity checks